Diary of an ESL Teacher: Ray and Kailin Find Love in Russia

It's that time of the month again!  Another teacher interview that is.
This particular interview is with a couple that I had the great pleasure of getting to know over the past few months while they taught in Taiwan.  Kailin and Ray fell in love while teaching English in Russia, (how romantic is that?) got married, and decided to continue their life abroad by teaching in Taiwan.  They just finished up a six month stint here, and are now on their way to Germany to spend some time with family and see what happens next!
--- 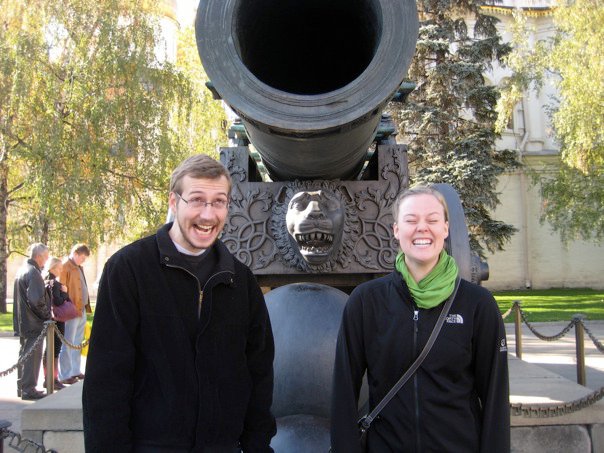 1. Where did you choose to teach English and why?

Neither Ray or myself ever planned on being a teacher, it was probably the last career on my minds actually. We both chose to teach in St. Petersburg, Russia for various reasons: we wanted to do some service (our program in St. Pete’s was volunteer only), we wanted a foreign experience, and I actually used my service hours for a bachelors application in social work. When we came to Taiwan it was because we had such a fantastic time teaching in St. Petersburg! We were craving some travel again and we both love the challenges of teaching and living in a foreign country. We came because it is what made us happy. 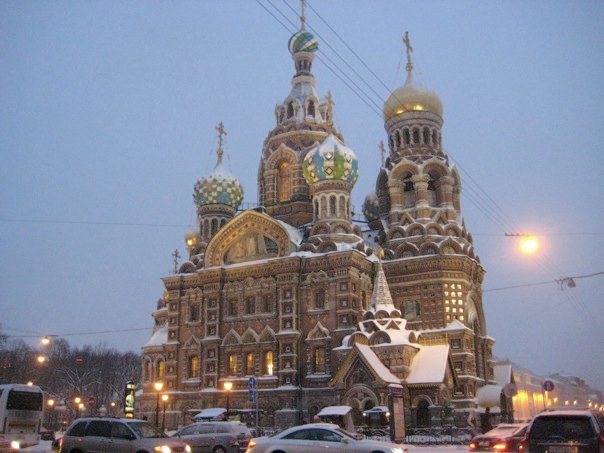 2. How did you prepare for your trip?

When we went to St. Petersburg, we had lots of time to prepare. Since it was volunteer we had to raise money for the program fee through strict budgeting and donations. Before St. Petersburg we spent a lot of time preparing ourselves by outlining goals we wanted to accomplish while there. When we came to Taiwan, we had much less time to prepare.We found out about the job posting and nineteen days later we were on a plane to Taiwan! Obviously this was a bit more of a financial burden since we had to unload some belongings as quickly as possible, we’d recommend giving yourself much more time. The things we were most glad we brought were our modern appliances, things like: iPods, kindles, and our computers. Both of our teaching experiences have been through ILP; International Language Program.

The program fee for St. Petersburg was $2,500 USD. That included airfare, visa application, some beginning Russian classes, training and school lunches. ILP volunteers stay with host families in their destination country, so living costs were zero.


The cost for Taiwan included: visa application ($160 USD/per application), passport (I had to get an expedited passport, take it from me and just always makes sure your passport is current!), moving costs (e.g. selling the car, canceling phone plans, moving truck rental, etc.)


4. What was your first impression of the new country?

Our first impressions of both Russia and Taiwan were just... dirty! Neither of us grew up in very big cities so I think that switch made a big impact on us. We remember feeling almost assaulted by all the hustle and bustle in Taiwan; the traffic, bright lights and loud noises were demanding of our attention for the first week or so we were there. 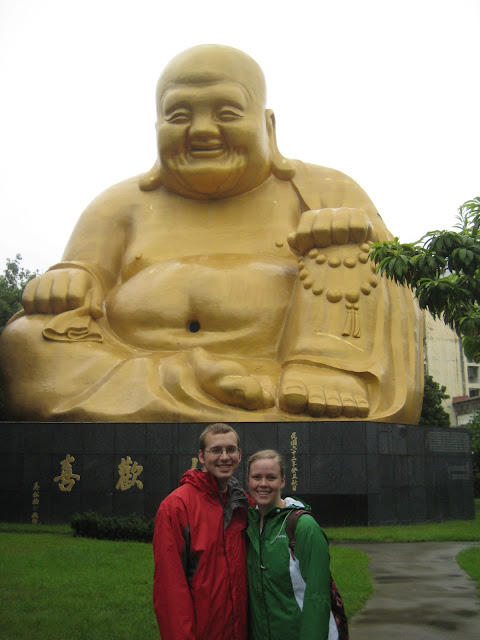 5. What was the most challenging obstacle for you to overcome?

We think our preparation time helped immensely in keeping us positive in Russia. However, The biggest obstacle in Taiwan was just general discomfort. The heat and humidity took about a month to adjust to, same as the box spring ‘soft’ beds. After a long day it was easy to ask yourself what on earth you’d been thinking getting on the plane here as you melted sitting under the A/C... but, those moments always passed. Just as strongly you’d felt you were elsewhere, two days later you’d be cringing at the idea of ever leaving. 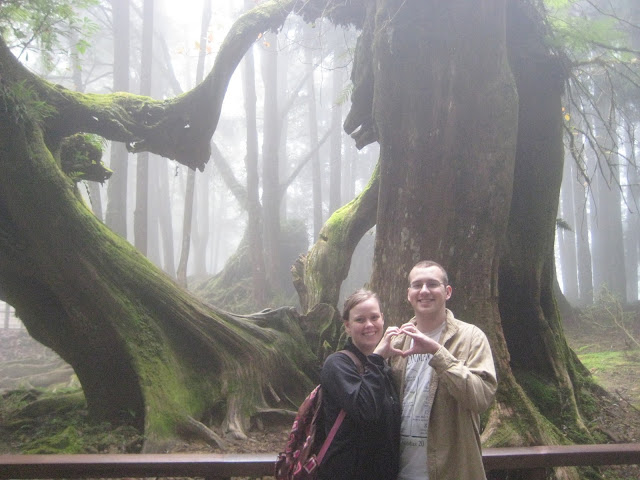 6. What is the most valuable thing you've learned so far?

Ray and I often say to each other “home is wherever I’m with you.” Sometimes when you’re traveling and working abroad it can be very easy to get lonely and start focusing only on the things you see as negative parts of the experience. We’ve learned that you can be happy anywhere and in any situation. It’s been important and valuable to us to define our home and our haven, by the people we’re with and the attitudes we bring.


7. How has this experience changed your outlook on life or personal philosophy?

Living abroad has made us have much more gratitude for the things we had when we were living in the U.S. On top of that, living abroad actually increased our political involvement as we learned from the systems we were currently in and compared them to the ideas and plans America was promoting. Finally, living abroad has given us greater patience and humility. It’s difficult being the outsider and just trying to order lunch when you don’t speak a lick of the language! It’s helped us remember that everyone is just trying to find joy in life, and if they want to be in a foreign country to do that, awesome!


8. Tell me about a favourite moment or story

My favorite thing about teaching English, hands down is my students, and yes, often they have very unique names. In one of my classes I had a student named ‘Openmilk’ which is like a cereal treat in Taiwan sold at 7/11. One time in class, my 8-10 year old students were trying to explain to me the meanings of their Chinese names. They proudly and excitedly told me that one character in Openmilk’s name means pig. I about died from shock as I quickly tried to clarify that his name actually meant pig! Through fits of laughter they continued to try and explain that only the character meant pig, not his name. And through more shrieks and giggles on my part I continued to get more confused.The kids started throwing out more and more name meanings until the entire class was in a frenzied state, laughing and acting like the animals their names “symbolize.” 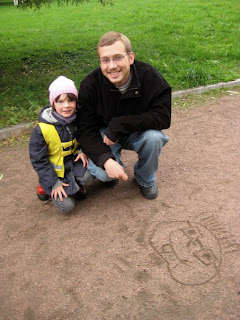 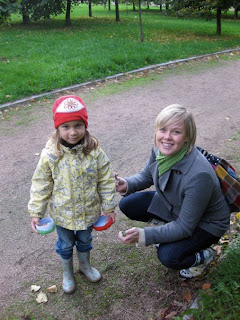 In Russia, we loved getting blini, which are Russian crepes. Our favorite food in Taiwan was a complete meal of fried curry dumplings and dongua cha (a sweet, wintermelon tea drink). The dumpling house near our apartment always ran out of curry dumplings before we got off work so it was always a treat when we did get them! Our least favorite food had to be Stinky Tofu. It was infamous before we even got to Taiwan, but the smell was nothing we could have ever prepared ourselves for. After 6 months of pressure from our students to try it, we finally did. While we’re proud to say we did it, it’s something we’ll probably never repeat again.


10. Favourite thing to do in your new country?

In St. Petersburg our favorite thing to do was go to the Hermitage. The artwork was unbelievably extensive and even though we went 5 times we didn’t even get halfway through the collection. In Taiwan, because the island is pretty small, our favorite thing to do was travel. Although we didn’t see everything, we made it from Northern tip to Southern tip. Close to our home was the city of Lukang which always provided numerous hours of cultural and shopping entertainment.


11. Any advice you would give to someone considering moving abroad to teach


My best advice to anyone considering moving abroad to teach would be to do your research before you go, and then stay as flexible as possible with your plans. Working in a new culture can be confusing and frustrating, you’ll be happiest if you just go with the flow of your new working environment.

Since you've taught in both Taiwan and Russia, how would you compare the two?

I think Russia was a little more easy to acclimate to since it’s still very European and we blended in there, physically and culturally. Taiwan presented a much more difficult task since we stood out like sore thumbs! (Thank you blonde hair and blue eyes!) It was fun in Taiwan to have people so willingly try to speak to you in English, they were always eager to practice. That wasn’t always the case in Russia, we’d have been in a lot more trouble without our basic Russian class we took. Obviously climate was a huge difference too. We were in St. Petersburg (about 6 degrees south of the Arctic Circle) from fall into winter, it’s the coldest we’ve ever been. We made it to Taiwan in the dead of summer with high humidity, which is the hottest we’ve ever been! After both, we both agreed that cooler climates are more our style. Russia and Taiwan presented complete opposites for us, with ups and downs in each. In the end, we’re grateful for each of them and can always reflect on cherished memories from each country.

---
Thanks so much Kailin and Ray for your interview!  It was great getting to know you while you were here.  Can't wait to hear more about your new adventures in Germany!
They blog over at His and Her Stories, so go on and check them out!

Also stay tuned for a Giveaway from DarbyMack this weekend!!

Check out some of the previous interviews here:
Chelsea and Jeremy in Korea
Sergio in Japan
Sara in Taiwan
Kendra in China
JoAnna in Korea
Posted by Lauren Roerick Miller